Today I happened upon the Paseo Arts Festival. 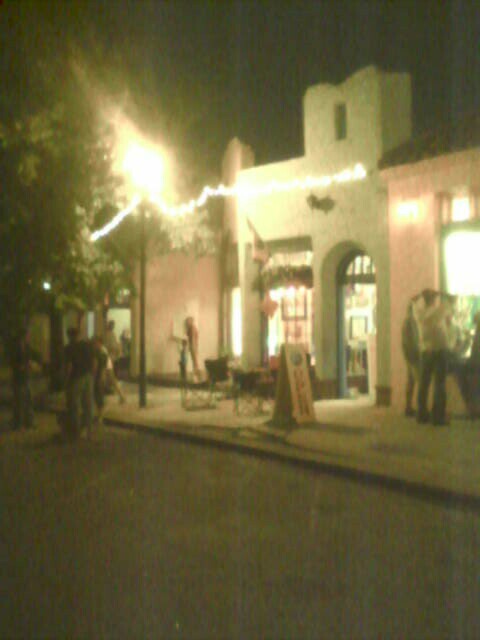 That picture doesn’t really do it justice.  Anyway, I sneaked around as it was closing and as the band played “Inagaddadavida”.  The Paseo is a small street off the beaten path in Oklahoma City where a ton of artists live and have studios.  I saw a scultpor’s studio, photographer’s studios, and a lot of closed Indian Taco stands.

Lately I haven’t been up to too much.  The friends and I have resolved to watch all of the Star Wars movies in order.  I’m not the hugest fan but it’s a good source of trivia for who knows when.  (Jeopardy!, here I come)

I hope that my other blog doesn’t wither and die.  I’m not entirely convinced that I will have enough sources of logical fallacies in news articles to make it interesting.  I will keep looking though.  Feel free to contact me if you find some.  I’m trying to stick to reputable sources.

My new phone has better text messaging and photo mail abilities, so I’ve been sending dog pictures out to Carrie and posting cameraphones pictures on my Flickr site.  They are decidedly low quality but fun nonetheless.  One of these days I’ll get my actual camera fixed.

Meredith’s father brews beer (and wine, actually) at home.  He keeps track of every batch in a notebook.  Right now he’s working on his 57th batch.  Seeing all of the handwriting made me wish I had something to keep track of longterm like that.

For those of you who don’t know, I am obsessed with typography these days.  This isn’t just a passing thing, like my cryptography phase or my oscillating interest with Thomas Pynchon.  I’m downright obsessed.  My two favorite fonts of the moment are Incognito and Dolly, both available from Veer, the design company famous (in my eyes) for employing Grant Hutchinson.

Dolly is “a book typeface with fluorishes”.  I love book typefaces, and every time I read a book I spend about as much time admiring the letterforms as I do reading the actual content.

Incognito is based on the fancy writing of old maps.  When I was a child I would peer into maps endlessly.  The best part about this font is that each capital has a swash variant that goes in one of four different directions, named after the Latin for North, East, South, and West.  Very elegant, albeit a bit overused in their type specimens.